In 1637, Charles I of England tried to impose a new prayer book on the Scots. The Scots wanted simple and plain prayer services while the new prayer book required more ritual and grandeur. Charles was unwilling to make concessions over the use of the English-style prayer book, or for allowing the bishops to take the blame for its introduction. This turned a limited protest into full scale rebellion. By 1638, Charles was preparing to go to war against his rebellious Scottish subjects.

Charles' forces were ill prepared, due to lack of funds. This caused Charles to recall Parliament to raise the necessary money, but the King had a long history of ill will toward Parliament and no agreement was reached. The struggle for power between King and Parliament eventually led to civil war in 1642.

This document was prepared by the Office of the Ordnance in November 1637. It tabulates the current inventory of the Royal armouries and compares it with the inventory levels recommended by the council of war in 1626. It also sets out the cost of making up the difference. 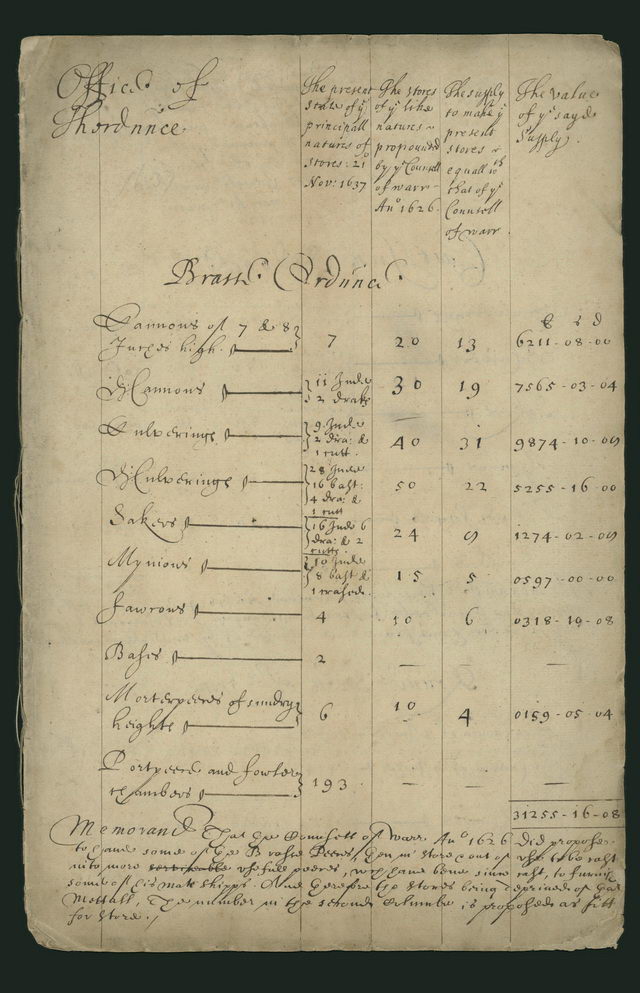 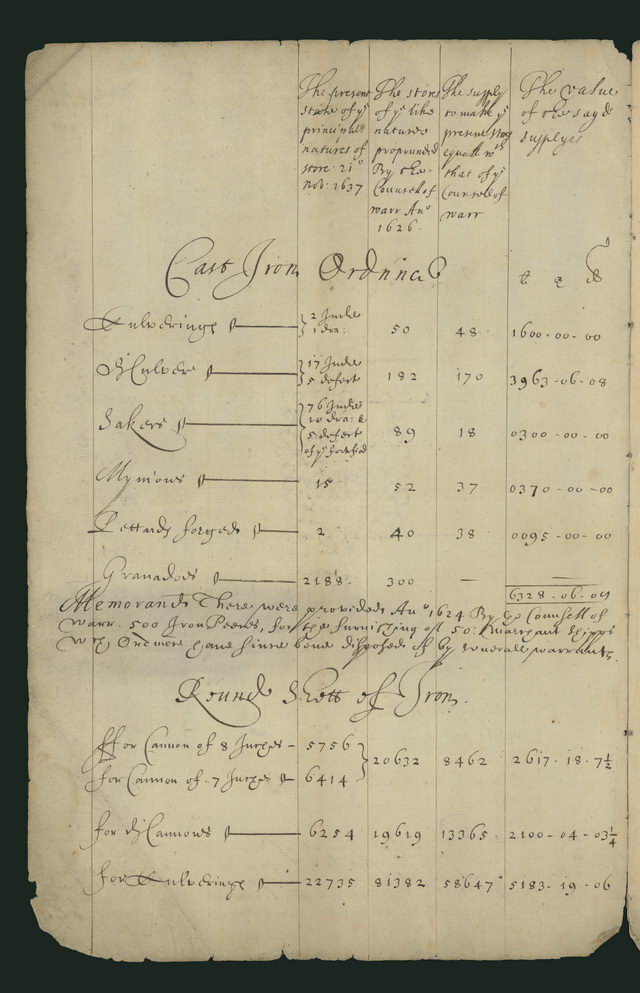 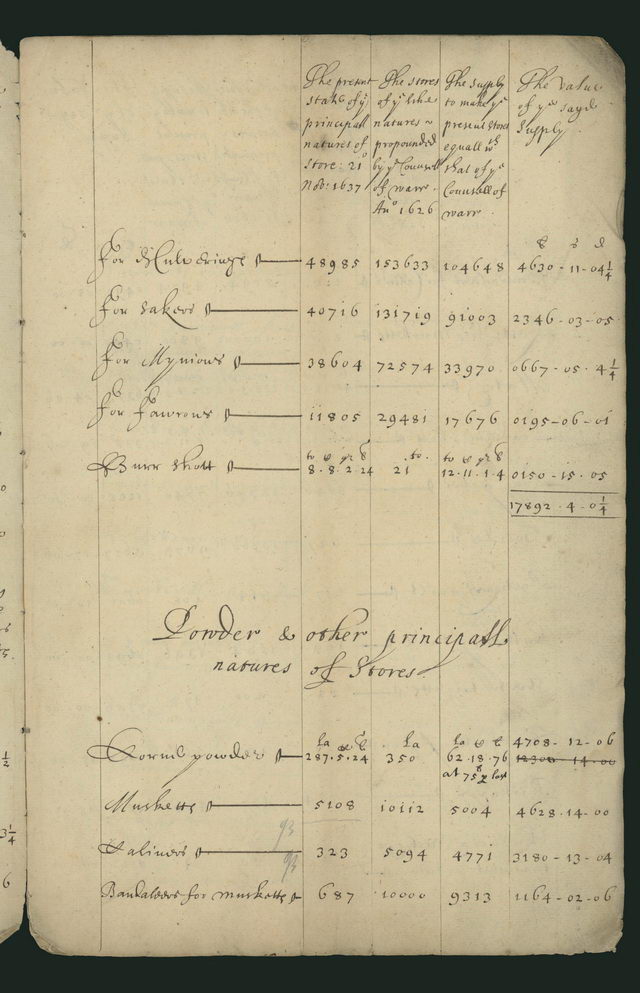 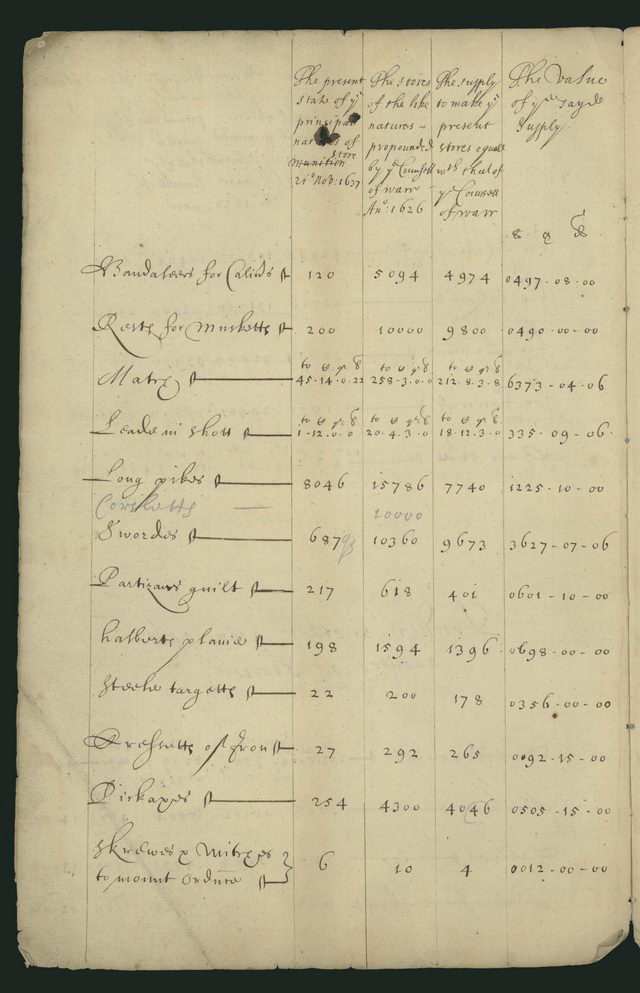 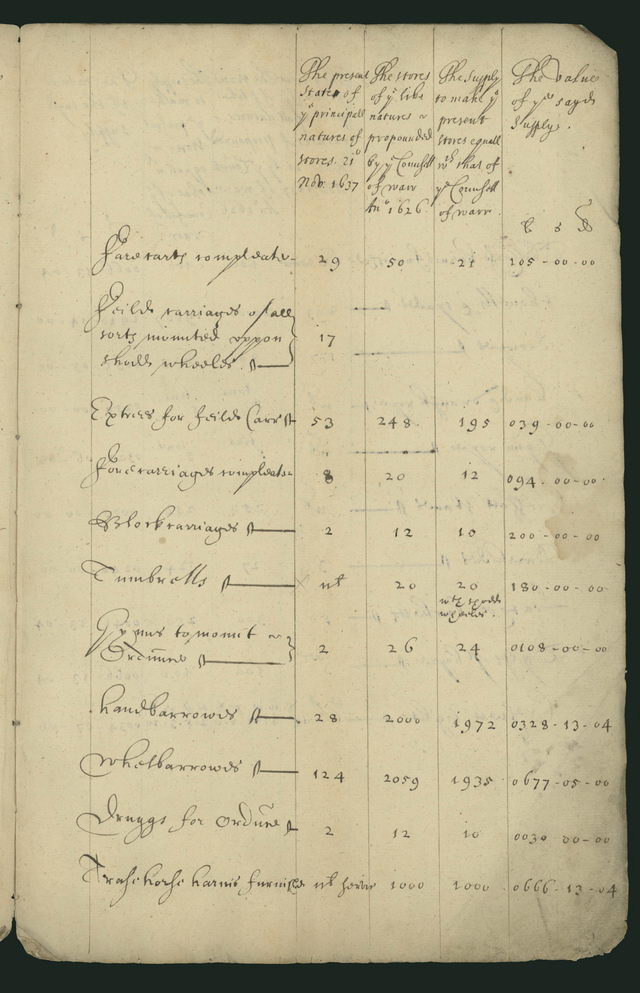 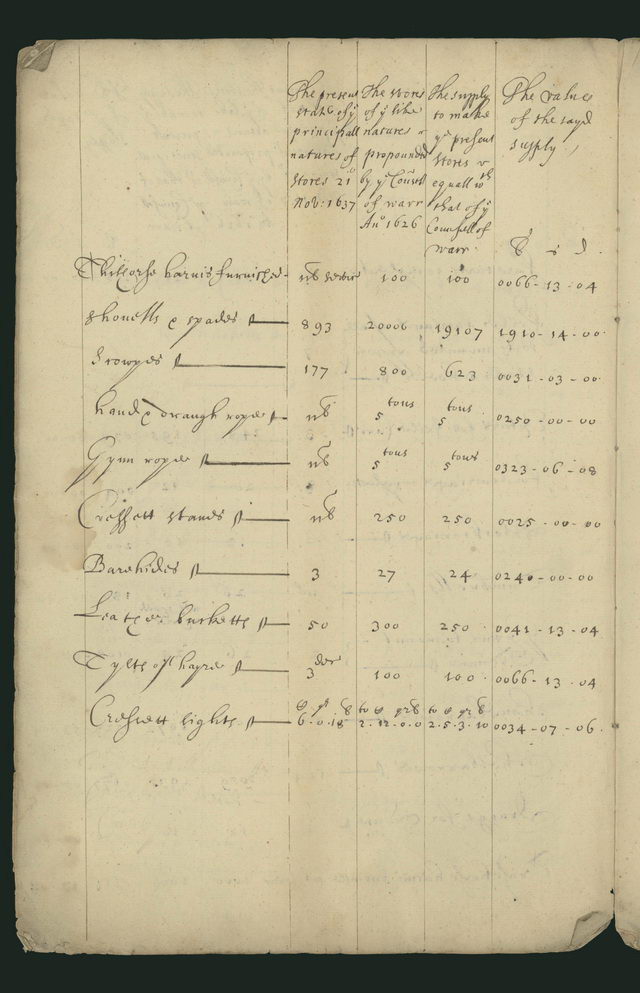 Figure 1. An inventory of the Royal Ordnance 1637, with deficiencies from that recommended by the council of war in 1626.

Indenture: An official or authenticated inventory or list, derived from the use of notches (indents) on multiple copies of the documents that could be matched to prove authenticity.

Demi Cannon: A gun firing round shot of 6 inch diameter (variously recorded at 61/8 and 63/8 inches), weight of shot approx. 32 pounds.

Culveriny (culverin): A gun firing round shot of 5 inch diameter (variously recorded at 43/4 and 51/4 inches), weight of shot approx. 18 pounds.

Demi Culverin: A gun firing round shot of 4 inch diameter (variously recorded at 41/4 and 41/2 inches), weight of shot approx. 12 pounds.

Saker: A gun firing round shot of 3 inch diameter (variously recorded at 31/4 and 33/4 inches), weight of shot approx. 6 pounds.

Falcon: A piece of ordnance of 21/2 inch calibre firing round shot with weight approx. 11/2 pounds.

Base: A piece of ordnance of 11/2 inch calibre firing round shot with weight approx. 1/2 a pound.

Mort Engines: A mortar. A piece of ordnance with a very short barrel firing granados with high trajectory. Their bore was typically 13 to 15 inches.

Musket: A muzzle-loaded, smooth bore long gun, fired from the shoulder. The Council of War in 1630 laid down that barrel was to be 4 ft long and of 12 bore, i.e 12 lead shot to the pound, equ. to a musket ball diameter of 0.73". Both flintlock and the cheaper matchlock were in use. These rather heavy weapons were usually supported by a rest when fired.

Drake: A lighter weight version of the standard types of cannon, firing the same shot but using a smaller charge, commensurate with their lesser barrel strength.

Cutt: A gun with shortened barrel originally made by cutting off the end of a failed barrel, later a version of the standard types cast with a shorter barrel.

Pettard (petard): A small bell-shaped bomb used to breach a gate or wall.

Granado: A grenade, a hollow metal shell filled with gunpowder, ignited by a fuse.

Corned Gunpowder: Gunpowder comprised Saltpetre (KNO3), Charcoal (C) and Sulphur (S) in the proportions 75:12½:12½ (English standard in 1645). When finely ground and mixed, it was referred to a Serpentine gunpowder. Corned or grain gunpowder was made from a slurry of the ingredients mixed with liquid (usually water) which was then dried and resulting cakes ground into uniformly sized grains. The liquid mixing allowed the saltpetre and sulphur to lodge in the interstices of the charcoal which ensured the mix didn't separate during travel. Controlling the grain size controlled grain surface area and hence burn rate.

Caliver: A large pistol or blunderbuss.

Bandaleer (bandelleer): Little wooden cases covered with leather, each of them containing the charge of powder for a musket, and fastened to a broad band of leather which the musketeer wore round his neck.

Pike: A long wooden shafted weapon having a pointed head, used by infantry particularly against cavalry.

Match: A wick, cord, or the like, impregnated with chemicals and allowed to burn continuously at an even rate, used as an ignition source to fire cannon. An army consumed match at a great rate, e.g. in 1644 a 1500 man company are recorded as consuming 5 cwt (250kg) of match per day.

Partizan (partisan): A kind of short pike, used in places where the long pike would have been inconvenient.

Halbert: A weapon having an axe-like blade and a steel spike mounted on the end of a long shaft.

Stook Target: A target made from a sheaf of wheat or barley.

Cressett (cresset): A metal cup or basket often mounted on a pole or suspended from above, containing oil, pitch, a rope steeped in rosin, etc., burned as a light.

Scowpe (scoop): A cylindrical container on a long handle used to deliver a measured quantity of gunpowder into the cannon barrel.

Tumbrell: A cart, usually referring to a two wheeled cart.

Block Carriage: A carriage with solid or 'block' wheels.

Tylt of Hayde (tilt of hide): A cover made of cattle hide, for a wagon.

Gynn (gin): A pole or mast which is guyed by ropes to maintain it in a vertical or nearly vertical position, fitted at the top with hoisting tackle.