Basic principle of the Zoom FFT

The zoom FFT (Fast Fourier Transform) is a signal processing technique used to analyse a portion of a spectrum at high resolution. Fig. 1a shows the spectrum of a real signal, with the region of interest shaded. The steps to apply the zoom FFT to this region are as follows:

Figure 2. Spectrum of real time domain signal. Its real part is EVEN and imaginary part is ODD.

Figure 3. Spectrum of cos(ωt), a real function with EVEN real Fourier transform consisting of two delta functions one at ω and one at -ω.

Figure 4. Spectrum of sin(ωt), a real function with ODD imaginary Fourier transform consisting of two delta functions one at ω and one at -ω.

Moving a signal to a different frequency has long been used in amplitude modulated (AM) radio signals where an audio frequency signal is mixed with (multiplied by) a high frequency carrier. Multiplying signals in the time domain is equivalent to convolving their spectra in the frequency domain. So a copy of the audio spectrum appears centered on the carrier frequency in the RF part of the spectrum.

So if ω is the (angular) frequency in the center of the region to be analyzed, then multiplying by, say, cos(-ωt) can be expected to move the region of interest down in frequency centered on 0 frequency. Fig 5 shows the result of multiplying by cos(-ωt).

Figure 5. Schematic diagram of the convolution of spectra of cos(ωt) and a real signal spectrum. Resulting spectrum show that two copies of the signal spectrum are generated.

The second copy of the signal spectrum must be eliminated, as it corrupts the information around the 0 Hz. To do this, the convolution needs to be done with a single delta function. This can be achieved by using a sum of cos(ωt) and sin(ωt). sin(ωt) has the same frequency components as the cos(ωt) but has an ODD spectrum, ie. it has a negative delta function at ω and a positive delta function at -ω, but these lie in the imaginary domain. Multiplying sin(ωt) by i would convert all imaginary points to negative real equivalent (i*i = -1), see Fig 6. Thus cos(ωt) - isin(ωt) should have a frequency spectrum comprising just a single real delta function at -ω, see Fig 7.

Figure 6. Spectrum of cos(ωt) in blue, and the spectrum of -i*sin(ωt) in green.

Figure 7. Spectrum of cos(ωt)-isin(ωt) consisting of a delta function at -ω.

Multiplying the signal by cos(ωt) - isin(ωt) is equivalent to convolving its spectrum with the single delta function at -ω producing the shifted spectrum required.

so the formula is usually written as:

If the digital time domain real signal is represented by Xk, where the subscript 'k' represents successive time domain samples, then the array X(real) has all the signal samples. No X(imag) array is necessary as all values would be 0 for a real input signal. The frequency shifted signal, Y, will be a complex time domain signal and is given by:

As in all complex number manipulation, the addition of real and imaginary components is only notation, the two arrays hold the real and imaginary components and corresponding elements from each array are treated as the components of a single complex value in all calculations. The multiplication by i is implicit, by placing the data in the Y(imag) array all subsequent calculations will treat Y(imag) array elements as having an i coefficient.

Using JavaScript as a demonstration language, here is the code to frequency translate a time domain signal.

If the time domain data to be frequency translated is already complex, ie. the imaginary components of the samples, X(imag) are not all 0, then the multiply by e-iωt becomes a complex multiply:

The choice of filter characteristics will depend on the amount of 'zooming' required. An increase in resolution of 4 or 5 may be sufficient. On the other hand, zoom factors of 50 or more may be required. The most flexible way to address the filter stage of the Zoom FFT is to use a short FIR (finite impulse response) anti-aliasing filter and decimate (sub-sample) the output data, then filter again, usually with the same FIR coefficients, and decimate again. Typically the frequency resolution is increased by a factor of about 4 for each pass.

An example may be the easiest way to illustrate the technique. Assume the following values:

The width of the transition region is determined by the number of points in the FIR filter. The filter length should be as small as possible for efficiency, i.e. small compared to the length of the FFTs that are used in the filtering process. If a 1024 point FFT is used a filter width of around 100 points would be acceptable.

The FIR filter design using the Kaiser-Bessel window method is suitable for this type of situation. A description of this method and an interactive filter design page is available at the FilterDesign page. Various values of cut off frequency and filter length may be tried, and the resulting filter spectrum displayed.

The impulse response of the desired filter having been calculated, it remains to do the filtering. This may be done by direct convolution of the time domain data with the impulse response of the FIR filter, a computationally intensive method. Alternatively the equivalence of convolution in the time domain to multiplication in the frequency domain may be used to exploit the efficiency of the FFT algorithm.

The steps in frequency domain filtering are as follows:

The last three operations are then repeated until the input is consumed.

When directly convolving in the time domain, the first and last few points of the input data do not get filtered correctly. This may be explained as follows. If the length of the impulse response of the filter, M, is 113 points, then Np = (M-1)/2 is 56 points. Convolution takes 56 points before and 56 points after each input data point, and multiplies them by the corresponding points in the filter impulse response. These product values are then summed to generate a single filtered data point. Clearly point number Np (=56) is the first point in the buffer with 56 valid points preceding it, similarly the point 57 places from the end of the buffer is the last that can be correctly filtered.

In the frequency domain filtering, the FFT of a data block produces the Fourier transform of a signal corresponding to the block of time domain points repeated again and again, butted together. So the filtering of the 56 points at the start of the FFT buffer use data points from the end of the buffer as part of the convolution. Similarly the last 56 use data from the beginning of the buffer in their filtering. As a result, 113 of the points of each FFT buffer are not correctly filtered and should be discarded. If the FFT is 1024 points long then only 912 (1024-112) points should be saved. To compensate the next 1024 point selected from the input should overlap the previous set by 112 points to avoid 112 point gaps in the output buffer. Once again it is not possible to correctly filter the first and last 56 points in the input data, but the overlap-save method correctly generates all the data that time domain convolution can generate.

Fig 11 shows a schematic diagram of overlap-save filtering. The FIR impulse response is shown as green areas of a time domain buffer this is then FFT'd. The filtering proceeds by taking a the FFT of a slab of data from the long input buffer (shown in red) these frequency domain data are multiplied by the FFT of the filter impulse response. The inverse FFT is then taken and the uncorrupted center section (shown in blue) of the result is saved in the output buffer. The next slab of the input data overlaps the previous section of the input buffer (as shown by the darker red block). This process is then repeated. 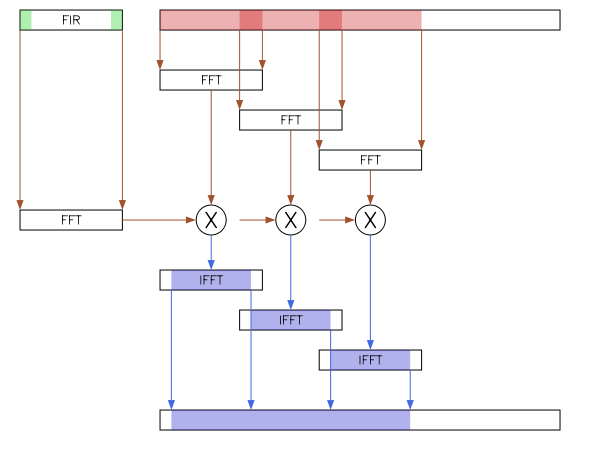 After anti-alias filtering, the time domain data is sub-sampled. Assuming a sub-sample rate of 4, the buffer length of the signal data is now ¼ of the original length. If there is sufficient data, the filter sub-sample process can be repeated. This zooms-in further on the region of interest (now near 0Hz).

The anti-aliasing filter coefficients required to allow a second sub-sampling by 4 are identical to those previously generated. The sampling frequency is 16384Hz (65536/4) and the low pass cutoff frequency is 2048Hz (8192/4). So filtering the sub-sampled signal a second time with the same coefficients will give a spectrum suitable for decimation at a frequency of 4096Hz. This will have a clean pass band of 1600Hz (6400/4).

If the two pass filtering were done as described, and then the FFT of 1024 points of the data is taken, then the spectrum from 0 to 1600Hz will be a zoomed view of the original region of interest. The frequency resolution of this zoomed spectrum will be 4Hz (4096/16) sixteen times finer than the original 64Hz (65536/1024).

To demonstrate the complete process a data buffer of 20000 points has been created, it contains random noise along with two high frequency tones, close together, around 19 kHz.

Fig 12 shows the sample spectrum of the raw data buffer.

Here is the source code of the zoom FFT process. The zoom frequency is 19 kHz, two passes of the anti-alias filter, sub-sample process are then carried out. The filter coefficients are those calculated above, the sub-sample factor is 4, so the frequency resolution is improved from 128 Hz to 8 Hz.

Fig 13 shows the spectrum of the data from the zoom FFT process.

The source code to generate the Zoom FFT output whose spectrum is shown in figure 13, is given below.